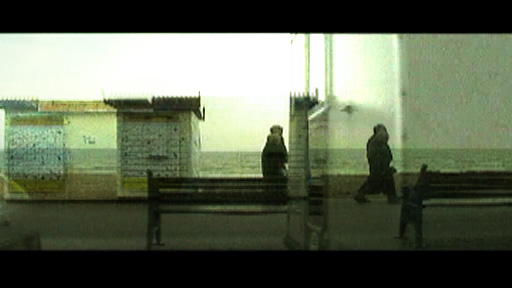 The screen is no longer this singular, fixed, and two dimensional rectangle that one forgets behind the projection of a film... The image is the screen, and this screen is the event.

- Future Cinema: The Cinematic Imaginary After Film- Jeffrey Shaw´s Apparatuses: On the Virtual, in situ. the events of a screen. Anne Marie Duguet.

(De-)Construct (2007) is a video projection based on a triptych which seems to be extending and pulling out from the central image towards the outer two images. At the point when there are no more images left and the process is exhausted, the two outer images return back towards the centre where time and place are not longer in sync. Not having found the 'real' image, the three images pull in and out over and over again.

This wave-like formation attempts to breathe life into the paradoxically static film medium. An effort perhaps to physically re-construct reality. The original footage was filmed from a car while driving along the coast line in Bognor Reagis, England. A once popular beach resort, now in decline.

The material recorded was split into 166 still images. The first image was overlaid with the last image, the second shot with the penultimate and so forth. This pattern was repeated until it reached a point of rupture in the middle of the re-constructed footage. Here the two images do not lie directly on top of each other, and so the re-construction rewinds back to the begin, and starts again.